FALLEN BURBANK POLICE OFFICER MATTHEW PAVELKA HONORED IN “CARRY THE LOAD” EVENT
Over Memorial Day weekend, fallen Burbank Police Officer Matthew Pavelka was honored by the Rowlett, Texas Police Department during the annual “Carry the Load” event.  This event is a two-day march across several cities in Texas honoring heroes and fallen police officers nationwide.  During the march, Rowlett Police Corporal David Norberg walked the first seven miles of a 32 mile leg wearing a bracelet in memory of Officer Pavelka.  Corporal Norberg chose to wear the bracelet to honor Officer Pavelka for his service to our country and sacrifice to our community.  Retired Burbank Police Detective Greg Campbell traveled to Texas and also participated in the event.  The bracelet worn by Corporal Norberg will be presented to the Pavelka family later this summer.

On Saturday, November 15, 2003, 20-year veteran Officer Greg Campbell had a plan. Officer Campbell had obtained tickets for an Oakland Raiders football game on Sunday and was looking forward to a weekend getaway with his 11-year-old son. All Campbell needed to do was leave work on time and everything else would fall into place. Unfortunately, that weekend getaway never materialized. Instead, the evening turned into a nightmare and a tragedy for Campbell and the entire Burbank Police Department.

Officer Campbell stopped a vehicle, without license plates, containing two males. The area where the stop was made was well known for drug trafficking and other criminal activity, so Officer Campbell wisely called for backup.

The first officer to respond was 26-year-old Matthew Pavelka, who had been in the field as police officer for just 10 months. When the officers approached the suspect vehicle and ordered the two male subjects to exit, the suspects managed to draw their weapons and the officers were forced to engage in a fierce gun battle. Both Officer Campbell and Officer Pavelka were wounded several times, but in the ensuing exchange of gun fire the officers mortally wounded one of the gunmen, 25-year old Ramon Arranda. The other suspect, 19-year old David Garcia fled the scene, later to flee to Mexico.

A massive, multi-agency manhunt was launched to locate David Garcia. On November 27, 2003, David Garcia was taken into custody.

Both of the wounded officers were transported to a local hospital, where Officer Pavelka died during surgery and Officer Campbell was treated and remained in critical but stable condition.
Matthew Pavelka was remembered by more than one of his fellow officers as a charming, light-hearted 26-year-old, with a crown of spiky orange hair, who loved being a cop.
Thanks to former Burbank Police Officer Brian Wilburn (1988-1991) who provided the information from the event and the photo. 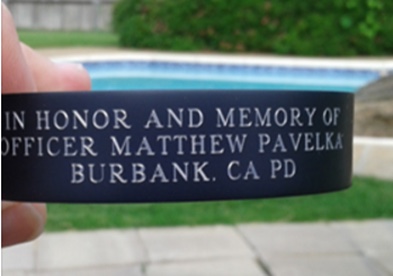