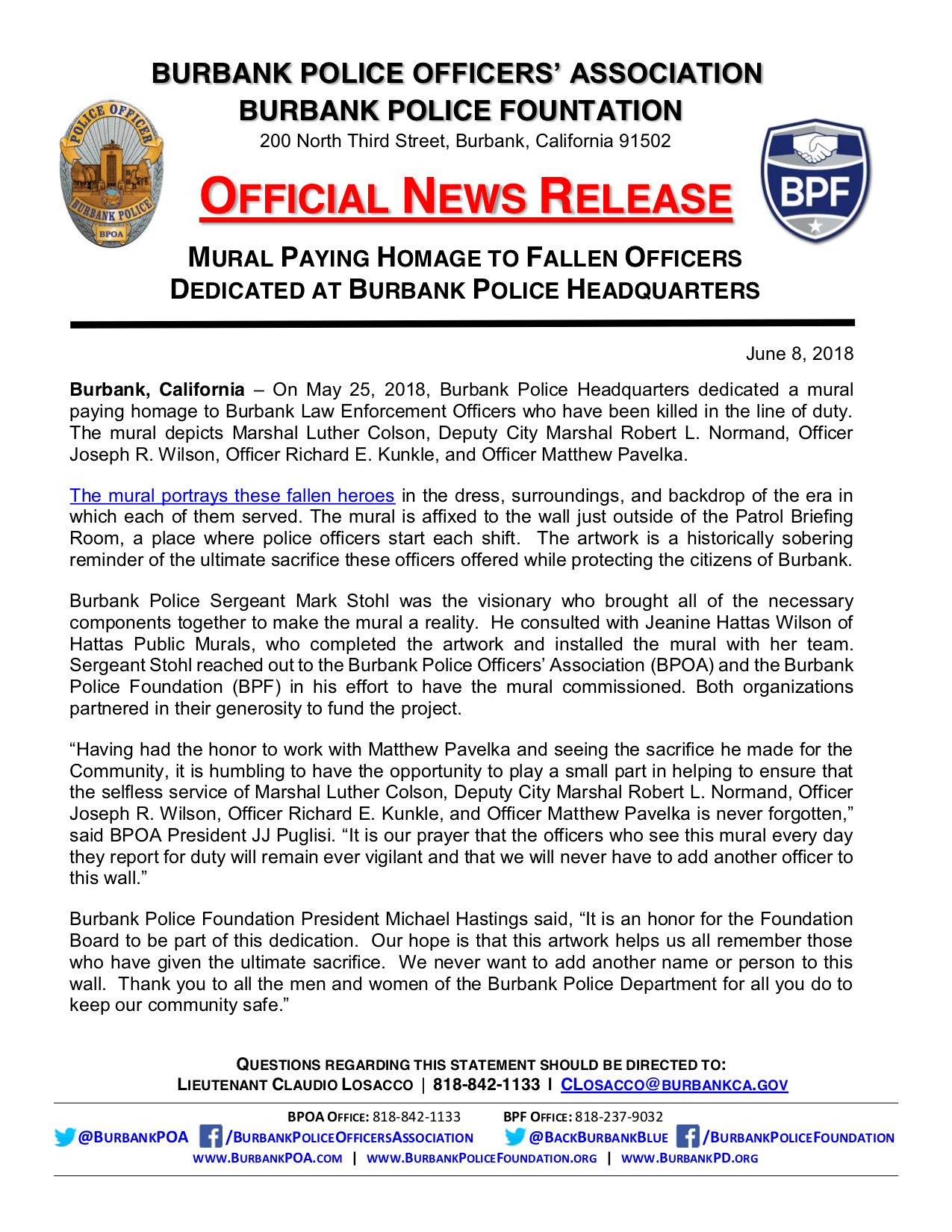 The mural portrays these fallen heroes in the dress, surroundings, and backdrop of the era in which each of them served. The mural is affixed to the wall just outside of the Patrol Briefing Room, a place where police officers start each shift. The artwork is a historically sobering reminder of the ultimate sacrifice these officers offered while protecting the citizens of Burbank.

Burbank Police Sergeant Mark Stohl was the visionary who brought all of the necessary components together to make the mural a reality. He consulted with Jeanine Hattas Wilson of Hattas Public Murals, who completed the artwork and installed the mural with her team. Sergeant Stohl reached out to the Burbank Police Officers’ Association (BPOA) and the Burbank Police Foundation (BPF) in his effort to have the mural commissioned. Both organizations partnered in their generosity to fund the project.

“Having had the honor to work with Matthew Pavelka and seeing the sacrifice he made for the Community, it is humbling to have the opportunity to play a small part in helping to ensure that the selfless service of Marshal Luther Colson, Deputy City Marshal Robert L. Normand, Officer Joseph R. Wilson, Officer Richard E. Kunkle, and Officer Matthew Pavelka is never forgotten,” said BPOA President JJ Puglisi. “It is our prayer that the officers who see this mural every day they report for duty will remain ever vigilant and that we will never have to add another officer to this wall.”

Burbank Police Foundation President Michael Hastings said, “It is an honor for the Foundation Board to be part of this dedication. Our hope is that this artwork helps us all remember those who have given the ultimate sacrifice. We never want to add another name or person to this wall. Thank you to all the men and women of the Burbank Police Department for all you do to keep our community safe.”

QUESTIONS REGARDING THIS STATEMENT SHOULD BE DIRECTED TO:
LIEUTENANT CLAUDIO LOSACCO | 818-842-1133 | [email protected]
View Official News Release PDF
Why 2018 could be an especially deadly year for co...
What happens when we run out of cops?